Try our Whiskey Cocktails at The Barbershop

As Mark Twain aptly wrote, “Too much of anything is bad, but too much good whiskey is barely enough.”

In our Las Vegas speakeasy, we offer up everything that a whiskey lover could possibly want, from varieties of whiskies from around the world and plenty of unique whisky cocktails that are perfect for when you feel celebratory, or maybe you just want to try something new.

What kind of whiskey do we serve?

Perhaps a better question would be…what kind or whiskey don’t we have? We may not have everything, but we have plenty of different whiskies to choose from and in many different forms.

You can buy it by the bottle, or sample your way through our menu–we have whiskies from the US, Canada, Ireland, and Japan. All said? There are more than 70 different varieties to choose from.

We also have plenty of whiskey-based cocktails on our menu. That’s all to say…we hope you’re coming thirsty!

Nice catch, eagle eye. While the two different spellings might seem like a mistake, it’s actually quite on the mark. Depending on where the spirit is made, it may be referred to as whiskey or whisky.

So which is better? Neither; it’s just based on the region. But generally, unless you want to face the wrath of the whiskey police, stick with the spelling that the country producing the spirit uses. 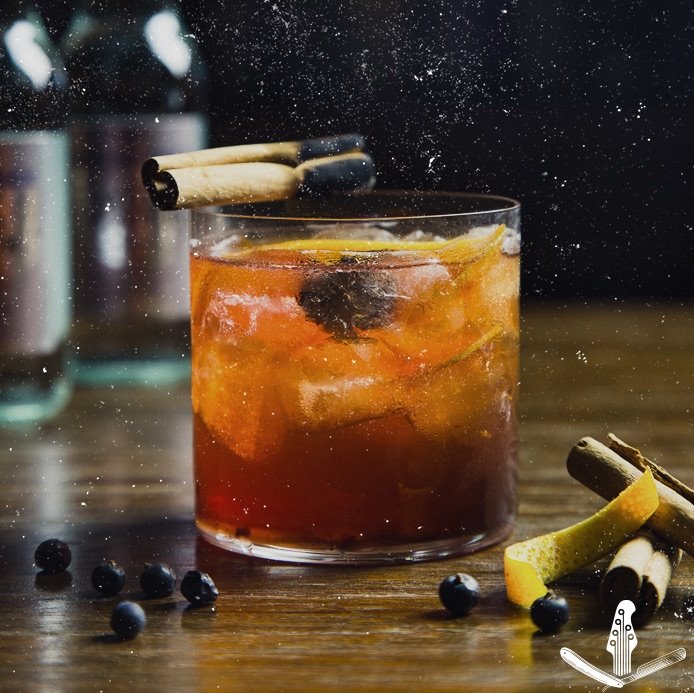 Come Drink Whiskey on the Strip at The Barbershop

Some whiskey enthusiasts will tell you that the only way to enjoy the liquid gold beverage is neat. However, we beg to differ. With cocktails as expertly crafted as these, whiskey is more than happy to share the limelight with a few other high quality ingredients.

Here’s a sampling of the whiskey drinks on the menu at The Barbershop:

Mustache Ride: Sweet and dark, this cocktail is made with Writer’s Tears Copper Pot Whiskey, Cherry Heering (a liqueur made by soaking lightly crushed Danish cherries and a blend of spices in neutral grain spirits), vanilla orgeat, Guinness, and a Black Islay mustache.

Espresso is in Fashion: Redemption Rye whiskey and espresso come together in dark harmony in this simple and slightly bitter (in a good way) cocktail, which finishes sweet with an espresso sugar rim.

Irish Honey: Like a taste of the old country! This liquid stunner is made with Jameson Black Barrel Irish Whiskey, lemon juice, St. Germain, and sage honey.

Note: Not sure what St. Germain is? It’s an interesting little story, so let’s take a brief side trip.

St. Germain is a liqueur made from elderflower. While it might seem old-timey, it’s actually a relatively new development. It was created in 2007, and quickly rose the ranks in the notoriously competitive cocktail market to become a go-to ingredient for mixologists.

It’s been lauded by The New York Times as having “single-handedly invigorated the moribund liqueur category”. Aren’t you curious to sample it now?

In addition to cocktails, we also have a shooter made with whiskey that’s perfect for those who crave sour flavors. You won’t want to miss our Mr. Pickles shooter, made with Jameson Irish Whiskey–it’s served under a dill pickle cup filled with its own juices. You’ve got to try it to believe it!

Ultimately, What Makes a Great Whiskey Bar on the Strip?

If whiskey is liquid gold, then consider our Vegas speakeasy your personal goldmine, your very own secret whiskey bar on the strip. At our premiere Las Vegas whiskey bar, you can find over 70 different types of whiskey from all over the world. So go ahead, sip at a whiskey neat or try it in one of our innovative, expertly made whiskey drinks.

What are you waiting for? Make your reservation to visit The Barbershop Today!